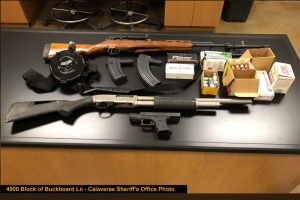 The Calaveras County Sheriff’s Office Marijuana Enforcement Unit served search warrants at two unrelated illegal marijuana cultivation sites. One at a property in the 600 block of Smitty Lane in West Point and the other in the 4900 block of Buckboard Lane in Campo Seco.

Deputies seized a combined total of 391 growing marijuana plants (estimated value more than $273,0000), several ounces of processed marijuana, 0.7 grams of methamphetamine. At the Campo Seco site, three firearms including a Glock .45 caliber semi-auto handgun, a 12 gauge pump shotgun SKS Rifle 7.62 X 39 Caliber. There was also 100 round drum magazine, 9mm and .22 caliber ammunition.  Also, an all-terrain vehicle that was determined to be stolen was found at the West Point residence.

Arrested at that grow was 39-year-old David Lee Foster of Railroad Flat for possession of a controlled substance and unlawful paraphernalia. Sheriff’s officials report the investigations into these sites are ongoing. They encourage anyone with knowledge of illegal marijuana cultivation to call the Sheriff’s Office Anonymous Marijuana Tip Line at (209) 754-6870.