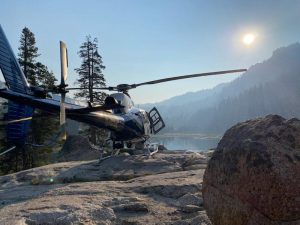 Sonora, CA — A hiker was rescued with a CHP Valley Division Air Operations helicopter at Bear Lake in Tuolumne County’s Emigrant Wilderness. The hiker was located after he activated a SPOT Device (GPS location beacon) at 6:18 AM on Sunday alerting Search and Rescue he needed assistance.

The Tuolumne County Sheriff’s office reports that Sgt. Jeff Hunt coordinated the rescue with CHP Mariposa, Sonora and Valley Division Air Operations. The CHP helicopter, flown by Officer Dan Lewis, was able to quickly locate the hiker and land nearby. As seen in the photos, Bear Lake is very remote, and finding a landing area can be risky and poses many challenges.  The hiker was contacted at 7:46 AM and Officer Brandon Hallam, a paramedic, began treating him. The hiker was loaded into the helicopter and flown to where an ambulance was waiting at Dodge Ridge Ski Resort.

The hiker’s situation involved significant medical complications but no further information has been released.