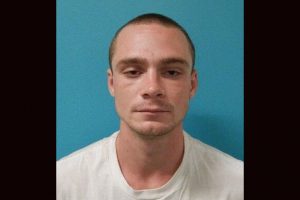 Sonora, CA – A motorcyclist raced off when spotted speeding, but that was not the only reason he led a deputy on a two-mile chase.

While on patrol Monday night a Tuolumne County Sheriff’s Deputy observed a motorcycle flying down Tuolumne Road. When the deputy gave pursuit, the rider, took off hitting speeds of more than 70 miles an hour while crossing double yellow lines, passing other vehicles.

After turning onto Mono Way, the rider, 21-year-old Justin Taylor of Sonora, ended the chase by pulling over. He was handcuffed without incident. Further investigation determined the bike had an expired registration and Taylor was not licensed to ride a motorcycle.

There was also an outstanding misdemeanor warrant on Tayor stemming from an arrest for carrying a loaded firearm. That allowed deputies to search his person. Inside his backpack, deputies discovered methamphetamine and drug paraphernalia. Taylor was arrested for felony fleeing, displaying a false registration, drug possession, and driving without a license. Taylor’s bail was set at $50,000.