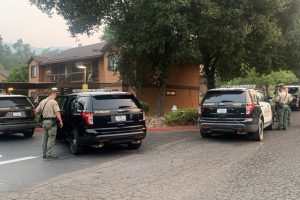 Sonora, CA – Spotting a flashlight moving about in a nearby apartment, a neighbor foiled a Sonora burglary in progress, resulting in two arrests.

The resident of the unit at the Quail Hollow Apartments on Chukar Circle in Sonora was not home at the time but received a text from the witness alerting them to the break-in. The flashlight could still be seen scanning the apartment by arriving Tuolumne County Sheriff’s Deputies. Then suddenly 28-year-old Mickey Ringer of Sonora appeared in the doorway and deputies ordered him to leave the apartment. Following behind him was 35-year-old Bonnie Palmer, also from Sonora. Both were handcuffed without incident.

A search of the pair turned up items stolen from the apartment, a large amount of methamphetamine and cash separated in several denominations, according to sheriff’s officials. The two were arrested for burglary, possession of methamphetamine for sale, and conspiracy to commit a crime with the extra charge of possession of drug paraphernalia tacked onto Palmer’s crimes. Their bond was set at $50,000 each.