The Mother Lode Mourns The Passing Of Stephen Collum 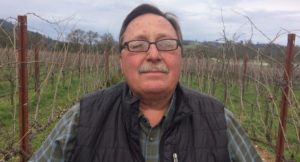 San Andreas, CA – The Calaveras wine industry has lost one of its greatest mentors, boosters, and creative collaborators.

It was a surprise even for many who knew him well as he was a private man and did not share that he had been diagnosed in recent months with liver cancer. Passionate about his work, he pressed on until the day he entered the hospital last week.

Calaveras Wine-grape Alliance (CWA) Executive Director Sandra Hess states, “Steve was a huge part of the Calaveras County wine community not only as a vineyard manager but as a friend to many and loyal supporter of the CWA.” Besides helping establish the group and serving as a long-time board director, he chaired the Education Committee, focusing on sustainable practices and regularly connected top-notch speakers and educators from across California with local growers and winery operators.

Newsome-Harlow Wines co-owner/winemaker Scott Klann comments, “This has been really hard. This wine community has lost three giants in the last few years, and it feels a bit disproportional…not that I would wish this on anywhere else, but…Barden Stevenot, Chuck Hovey, and now Stephen Collum all of a sudden – it leaves a large hole in the wine industry.”

He adds, “People say he was the heart and center of this industry, and I don’t think there is any truer statement that could be made about him. For me personally, he was a dear friend and mentor.”

Prospect 772 co-owner/winemaker Ron Pieretti, states, “Steve elevated the whole growing and wine industry…not only by his expertise that he brought here but being active with the CWA and being a helping hand to many startup wineries and vineyards…he is going to be truly missed by many people, not just in the growing community but as a citizen and for his easy laugh, and smile and his kind-heartedness.”

Collum majored in biology and viticulture at Fresno State, spending summers fighting fires in Yosemite National Park before heading to Sonoma with his wife Cindy in search of a vineyard management job. He became associated with St. Francis Vineyards and then moved to Kendall Jackson during a time the company was expanding internationally. In Tuscany, while assisting in developing a property in southeast Chianti, he became inspired to search for a place in California with similar terroir so he could plant his own Sangiovese.

That location turned out to be a property in Calaveras County near San Andreas that he and Cindy purchased in 1988 and established a vineyard. Three years later, he set up Vineyard Concepts, where his widely regarded focus was collaborating with owners and winemakers to make quality wines from vine to bottle. The company currently has its hands in operating about 200 acres of vineyards.

Freshly processing their loss, his employees are now scrambling to address the harvest season ahead, sharing that the wine-grape community is coming together to help get through grape transport operations. Describing him as “like a Dad, best friend, and teacher,” Elissa Reisbeck, his administrative assistant, shares, “Steve was a one-of-a-kind guy, and if you knew him you were touched forever by his presence, and he is going to forever be missed.”

Calaveras County Fair CEO Laurie Giannini recalls Collum’s service as a key volunteer in the wine exhibit building where he led educational demonstrations every year, adding, “We will miss his passion.” She confides he had the vision to build a demonstration vineyard at the Fairgrounds and hopes the organization might work towards fulfilling that dream.

CWA plans to host a memorial, probably in January or February, so that industry members across California can come together to honor him. For those interested, there is a Go Fund Me campaign set up by his Vineyard Concepts team as an immediate financial need is to cover medical bills. To access the page, click here.