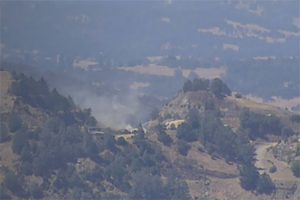 Carson Fire near in Carson Hill area of Calaveras County

Update at 2:20 p.m.: The Carson Fire burning inside the Carson Hill Quarry property has been contained at a half-acre. The flames ignited in some grass on a hill behind the quarry, which is off of Highway 49. CAL Fire reports there were no injuries or threat to any structures, and what sparked the blaze is under investigation. A small crew will remain on scene mopping up for the next couple of hours.

Update at 1:53 p.m.: CAL Fire has named the fire burning within the Carson Hill Quarry property the “Carson Fire.” The flames broke out in some grass on a hill behind the quarry, which is off of Highway 49. CAL Fire spokesperson Emily Kilgore reports that the fire is a half-acre in size. She adds that roads surrounding the flames are helping to contain them and all incoming resources have been called off the scene, including the aircraft. Further details will be provided once new information comes into the news center.

Original post at 1:40 p.m.: Carson Hill, CA — If you hear Columbia aircraft flying overhead, they along with ground crews are heading to a report of a vegetation fire in Calaveras County, off Highway 49.

The flames were spotted in the hills behind the Carson Hill Quarry and near Rainbow Way. There are no further details regarding the fire’s size, rate of spread, or whether any structures are threatened. An update will be provided as soon as new information comes into the newsroom.