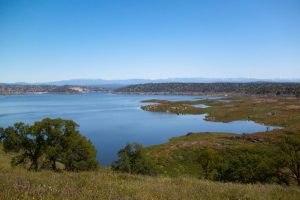 Calaveras County Sheriff’s spokesperson Sgt. Greg Stark reports the first incident, which occurred Saturday around 4 p.m., initially involved a wakeboarder and the boat that was pulling the rider.

According to witnesses, as the rider fell, the boat operator turned to retrieve that person but was apparently unaware that a second occupant of the same boat jumped into the water from the bow. The second person was subsequently struck as the vessel began to accelerate.

Stark says the impact caused the victim to go under the boat, where a propeller strike caused major shoulder and lower leg injuries. The boat operator immediately stopped and with the assistance of those onboard, removed the victim from the water after which two juveniles, a 15-year-old female and a 17-year-old male immediately initiated lifesaving efforts.

The victim after being transported to the Fiddleneck Boat Ramp was taken to a valley hospital for emergency treatment. Stark adds that the two juveniles are being directly credited with saving the victim’s life.

Around 7 p.m., while still investigating the first incident, Marine Safety deputies were dispatched to a second boating accident near the inlet commonly referred to as “The Cliffs.”

Stark recounts that while drifting with the engine idling, swimmers from the vessel entered the water where one was struck by the propeller. The strike caused a minor injury to the victim’s upper leg, resulting in that person being taken to a valley hospital for treatment. The boat operator, 34-year-old Michael Brodeal of Stockton, was arrested at the scene for boating under the influence of alcohol.

Stark says the exact cause of the accident is still under investigation.

He reminds boaters to use extreme caution while recreating on local waters, also reminding operators that a comprehensive first aid should be carried on all vessels. Unlike during most auto accidents, he points out, emergency personnel may not be able to immediately respond to your location when you are on the water.