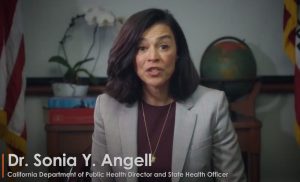 Governor Gavin Newsom issued a statement thanking Dr. Angell for her service and adding that she helped “steer our public health system during this global pandemic, while never losing sight of the importance of health equity.”

No reason was given for Dr. Angell’s departure. She often appeared next to Newsom during daily press briefings.

We reported that the public health department has been having major issues over the past week with its database system, the California Reportable Disease Information Exchange.

The state reports that the problem has now been identified and fixed, but officials are still working to process all of the backlogged data.

Two people have been assigned to fill her role during an interim period.