Fire In Yosemite Up To 58 Acres 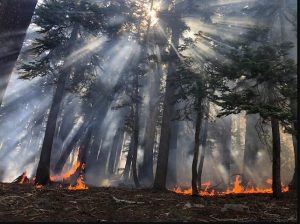 A crew is on scene monitoring the “Blue Jay Fire” and it is being slowed by natural barriers like granite and bare ground. It ignited on July 24 about a mile west of Lukens Lake Trail and is burning at an elevation of 9,000 feet.

Yosemite officials report, “The fire is creeping and smoldering through ground litter on the forest floor and burning in pockets of accumulated dead and down logs with some isolated single tree torching along its active perimeter.”

In addition, “The area the fire is burning in is a fire-adapted ecosystem. There are currently no threats to infrastructure or access on maintained trails. The fire will be visible from Tioga Road, Glacier Point, and from high country viewpoints.”

There is a perimeter around about 50-percent of the fire.