As Fire Season Heats Up, New CAL Fire Unit On The Attack 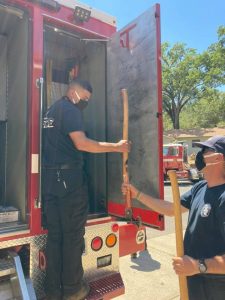 Sonora, CA – Just as fire season is heating up, CAL Fire Tuolumne-Calaveras Unit (TCU) has received additional support from the state in the form of more firefighters to help attack fires head-on.

The new hand crew dubbed “Crew 1,” which is being led by a captain and engineer, is made up of some seasoned firefighters from the unit and new hires from all over the state. The two shifts of 14 people began working out of Sonora at the beginning of this month. CAL Fire spokesperson Emily Kilgore details the crew’s work hours, “They’re covered 24 hours a day and each part of the crew will be on for three days at a time, so it will give us six days a week coverage.”

The new crew will be responding to emergencies locally and throughout the state, as needed, working line construction, and firing operations. Its daily duties will consist of preparing response readiness like the stocking of crew vehicles with tools, checking equipment functionality, inventorying medical supply bags, and working on fuel reduction and breaks projects.

The additional manpower is definitely needed with COVID-19 disrupting the use of inmate fire crews. Kilgore explains, “It’ll give us an additional resource similar to the utilization of the inmate crews. We will be utilizing this crew in the same fashion. So, it just gives us more firefighters to attack fires aggressively, like we always do. We’ll just have more personnel to do it.”

The state allocated money to several CAL Fire units across the state for staffing augmentation. Each unit that received the money could determine where to best utilize the funds. In the case of TCU that meant adding an additional hand crew. However, Kilgore did not have the total amount allotted for the crew as she says Regarding the amount allotted for the unit, Kilgore did not have details on the total budget, as its funding could change.

“Right now, we anticipate having the crew through October,” states Kilgore, “but if conditions warrant the state can continue to allocate money as necessary to keep the crew active.”