Update: Fire On The Stanislaus National Forest Near Buck Meadows 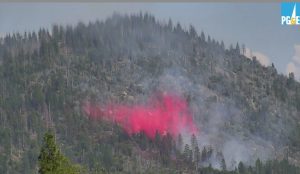 Update at 7:50pm: Crews have been successful in stopping the spread of the Mountain Fire in the Stanislaus National Forest. Spokesperson Diana Fredlund says, “The initial air attack was very effective and now engines and hand crews will remain at the fire overnight. There are two helicopters also remaining on the job while other air assets have been released.”

The latest size estimate is 4-5 acres.

Update at 5:10 p.m.: Here’s the latest on the Mountain Fire burning off Highway 120 east of Buck Meadows.

According to Stanislaus National Forest spokesperson Diana Fredlund, the estimated size remains at four to five acres. “The initial air attack was very effective. The fire crews have released the air tankers and one dozer. They also canceled the extra resources they had requested. Two helicopters remain on-site. Forest Service engines and hand crews will remain on-site, but fire behavior is significantly reduced thanks to the aggressive air attack.”

She adds as an FYI, lightning is occurring up the mountains so lightning fires are possible this weekend.

Update at 4:35pm: Air and ground resources continue to fight the Mountain Fire in the Stanislaus National Forest. Some of the CAL Fire air resources air still committed to the incident, while some others have been released. The latest size estimate remains 4-5 acres. There are no reports of any structures being threatened at this time.

Update at 3:43 p.m.: The Mountain Fire, located about 1.5 miles from Highway 120 near Sawmill is about four to five acres in size.

According to Stanislaus National Forest spokesperson Diana Fredlund, the blaze is described as having a moderate rate of spread and there is some spotting out ahead of the fire.

Original Post at 3:27 p.m.: Sonora, CA — If you heard planes overhead, air and ground units are responding to a vegetation fire off Highway 120 east of Buck Meadows.

The incident, located on the Stanislaus National Forest, is being called the Mountain Fire. CAL Fire says all Columbia aircraft are assigned. We have reached out to forest officials for more information and will provide more details as they become available.