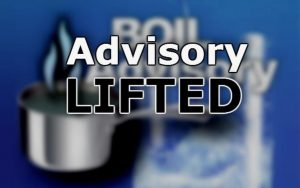 Avery, CA — The Calaveras County Water District is giving the “all clear” that the water is safe to drink for the 1,000 customers who received a boil notice earlier this week.

It was impacting an area of the Highway 4 corridor between Hunters Dam Road and Brice Station. The district had to submit samples for two state-mandated tests, and the final results were received this morning to indicate the water is safe for consumption.

The district reports, “An investigation has shown that the incident was the result of a failure of a mechanical device that was holding an 8” valve in place. That portion of the system has been eliminated and a secure bypass will remain in place until the new pipeline is brought into service. Once completed, the Reach 1 pipeline replacement project will eliminate approximately 4.5 miles of the old infrastructure that has failed on several occasions in recent years, including a separate and unrelated main break that also occurred on Tuesday. The new 12” pipeline is already in place and crews will be installing related appurtenances and connecting service laterals over the next two months. Temporary shut downs will be required to complete this process, but every effort will be made to limit the duration of the shutdowns and to avoid future boil water advisories.”