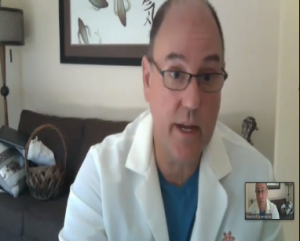 San Andreas, CA — An item that could soon be addressed in Calaveras County is enforcement against the fraction of the business community which is openly defying state COVID-19 regulations.

The issue came up during the discussion at today’s board of supervisors meeting about the county’s response to coronavirus. Calaveras County has had 99 cases, 54 are active, 44 are recovered, and there has been one death.

Calaveras is not on the state’s monitoring list (as Tuolumne County is preparing to be placed) because it has reported only 54 cases per 100,000 residents over the past 14 days (100 per 100,000 is the limit). Public Health Officer Dr. Dean Kelaita noted that the positivity rate for local testing, however, has been increasing, which is another measure used by the state. Earlier it was at around two-percent, then up to four percent, and is now over five-percent. If it gets to eight-percent, the county could be added to the state’s monitoring list. The additional state scrutiny would impact businesses like gyms, further limit the ability to hold church services, and impact schools.

To stay off the list, Dr. Kelaita stated that residents need to be diligent about wearing face coverings, wash hands regularly and practice social distancing.

He adds, “Cases have increased in Calaveras County 46-percent in the last 14 days, and the current rate of disease progression threatens to overwhelm our contact tracing capabilities, our local hospital care system, and places Calaveras County at risk for inclusion in the state’s list.

The hardest hit areas in Calaveras have been near the borders with San Joaquin and Stanislaus counties, as many people travel out of the county for work, or shopping, and then spread the virus back in the county.

Supervisor Jack Garamendi stated that he has heard concerns from businesses who are following the state’s regulations. Their issues is in regards to other businesses which are not.

Board Chair Merita Callaway stated, “To cut to the chase, it is up to the Board of Supervisors to put in place an enforcement protocol for the businesses who are thumbing their nose and having multiple complaints.”

She added that she would like to see an enforcement plan come to the board either at the next meeting in August, or during a special meeting prior to it.

CAO Albert Alt indicated that the county is reviewing the issue and developing a potential plan to address bad actors.

Supervisor Benjamin Stopper expressed some caution and cited statistics from public health, noting that 33-percent of the cases originate outside of the area, 33-percent are cases transferred to families and friends of those impacted people, and 33-percent are from unknown sources. He questioned if businesses should be the focus of enforcement measures because 66-percent of the cases are coming from out of the area.

Supervisor Dennis Mills said the near future conversation also needs to look at mass gatherings, and how people behave when visiting the county. “We need to have a very holistic conversation about all of it, and not just the businesses,” he stated.

Supervisor Mills has in the past brought up concerns about the high number of people utilizing recreational spots like Natural Bridges.

Dr. Kelaita added that the use of face coverings is a central issue that he hopes businesses will embrace and make sure that they are being utilized to help slow the spread and try to prevent the county from getting placed on the monitoring list.

Calaveras County earlier passed an urgency ordinance to give more flexibility and help businesses forced to operate outside, such as restaurants, due to to new state regulations.