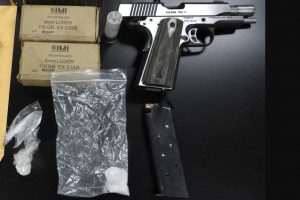 Investigators estimate the haul to be worth a street value of $2,442,000. The largest illegal grow was in the 9000 block of Whiskey Slide Road and raided on July 16th. Seized there were 2,239 marijuana plants, 23 pounds of processed pot, 10 grams of methamphetamine, 10 meth pipes, and a firearm. The estimated value of the marijuana exceeded 938,000. This same site was searched in 2017. At that time, 4,573 marijuana plants were discovered.

Two suspects found on the site, 33-year-old Jessica Leigh Odle and 25-year-old Jose Carlos Davila, both of Galt, were arrest. Odle faces possible felony charges of maintaining a drug house and misdemeanor charges of illegal marijuana cultivation, drug possession and conspiracy to commit crimes. Davila faces those same charges along with another felony for being armed while in possession of the drugs. Both were released on July 17th, on $100,000 bail each.

That same day, another illegal grow in the 16000 block of Hwy 26 in Glencoe was searched. Deputies eradicated 106 pot plants and 8 pounds of processed marijuana valued at $139,000 by investigators. The property had been raided twice before, once in 2018, and again in 2019.

The units’ first raids were conducted on July 7th at two Wilseyville properties. At the first grow, located in the 3000 block of Tree Lane, deputies seized 808 pot plants and over 200 pounds of processed marijuana with an estimated value of over $700,000. The second property raided in the 4000 block of Blue Mountain Road uncovered 231 plants and 64 grams of cultivated pot, estimated at over $160,000.

The unit then headed to Angels Camp on July 15th to search a residence in the 2000 block of Stallion Way. A total of 722 pot plants estimated worth more than $505,000 were uprooted. The next day, along with the aforementioned Mountain Ranch raid, a grow in the 16000 block of Highway 26 in Glencoe was also found to have 106  plants and 8 pounds of processed marijuana totaling over $139,000. This site had also been cited back in 2018 and 2019.

Sheriff’s officials remind that the public can help eradicate illegal grows in the county by reporting them to the Anonymous Marijuana Tip Line at (209) 754-6870.