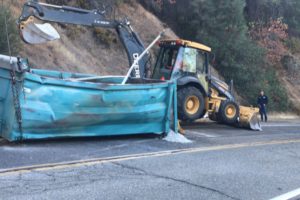 Columbia, CA – The driver of a big rig says he purposely steered his truck towards a mountainside on Parrotts Ferry Road in the Columbia area on Friday morning in hopes of stopping it, according to the CHP.

It was just before 7 a.m. when heading north down a steep, curvy section of the roadway before the bridge that truck driver 58-year-old Bradley Kraus of Oakdale says he knew he was in trouble. While only going around 25 mph in his 2014 Peterbilt three-axle dump truck that was pulling a trailer loaded with gravel, he found could not stop.

Sonora Unit CHP spokesperson Steve Machado relays what happened next, “As Mr. Kraus approached a curve in the roadway, he applied the brakes, however his vehicle did not respond. Mr. Kraus decided to steer his vehicle to the right into a mountainside to slow it down. The truck missed the mountain however, the right side of the trailer struck the side of the mountain. As a result, the trailer overturned, and gravel spilled on the roadway blocking the southbound lane.”

Officers directed one-way traffic control with minimal delays for about two hours as a tow crew worked to remove the wreckage, as earlier reported here. Luckily, Kraus was not injured in the crash. While neither alcohol nor drugs are suspected in the collision, according to Machado, investigators are having Kraus’ claims of mechanical failure checked out before making a final determination on the cause of the collision.