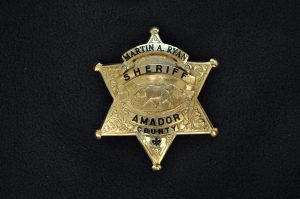 Amador County, CA – Mother Lode sheriff’s officials say they will shortly be reviewing FBI reports and analysis relating to the suspicious death of a federal official and whistleblower.

This week, Amador County sheriff’s officials are providing an update on a case involving the demise back in February of 66-year-old Philip Haney of Plymouth. Haney, a Department of Homeland Security officer for 15 years, published a book in 2016 titled “See Something, Say Nothing: A Homeland Security Officer Exposes the Government’s Submission to Jihad,” which alleged inaction against terrorism by the Obama Administration.

As reported here, Haney was found dead in his vehicle of a single gunshot wound. The car was parked in a park and ride lot off Highway 16 near the Highway 124 turnoff to Ione, three miles from his residence.

Initially, a statement was released describing the gunshot wound as “self-inflicted,” but it was quickly followed up by another release indicating that the death had not been determined a suicide and that an investigation was underway.
At the time it was reported that a gun, documents, phone records, and a laptop were found at the scene and that Haney’s home, a trailer in an RV park, had also been seized for evidence.

Amador County sheriff’s officials note that a forensic autopsy on Haney was performed by Sacramento County Coroner’s Office pathologists and that the sheriff’s department subsequently requested the FBI’s assistance in analyzing documents, phone records, numerous thumb drives and the laptop recovered from the Haney’s vehicle and RV. Those items and numerous other pieces of evidence were turned over to the FBI for a forensic examination.

According to sheriff’s officials, they expect FBI reports and analysis within the next few weeks and hope to complete their review shortly thereafter, comparing it with the information they have gathered from their own case investigation.