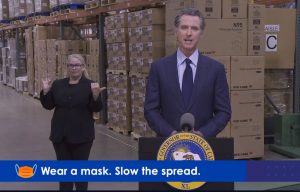 Sacramento, CA — With 413,576 COVID-19 cases, California has surpassed New York as the state with the most confirmed infections.

However, New York’s 32,500 deaths related to the virus are still four times California’s at this point and its confirmed rate of infections, at about 2,100 per 100,000, is double the California rate.

The new national record comes a day after the Golden State recorded its largest number of confirmed new in-state cases in a single day since the start of the pandemic. The state reported a record high single-day figure of 12,807 cases along with the state’s seven-day average of 9,420.

Tuesday’s across the state testing numbers totaled 127,487. So far there have been 6,664,419 tests administered. The seven-day positivity rate is 7.6 percent. “Those are a lot of numbers that tell us one thing: we must take this seriously,” states Governor Gavin Newsom in his Wednesday public update.

He was quick to add that California is by far the most populous U.S. state with nearly 40 million people while New York has about 19.5 million. “We are a state, again, the size of 21 states combined, so it’s not surprising now in some respects as we begin to reopen key sectors of our economy … that our numbers would start to go up…a sober reminder of why we are taking things as seriously as we are.”

Along with recently modifying business operations such as by moving faith-based and business activities such as restaurants and even more sectors in counties on the monitoring list, he noted the state is continually working on developing a multi-faceted platform and resources such as bridge contracts with manufacturers to deal with surges amid ongoing challenges in procuring sometimes still limited supplies such as PPE.

To that end, Newsom has directed the Department of Public Health and Office of Emergency Services to further increase the state’s strategic stockpile to 100 million N-95 respirators and 200 million surgical masks by early fall to meet the potential need.

His office reports to date, that the state has distributed 86.4 million N-95 respirators and 297 million surgical masks to Californians working on the front lines, such as hospitals, emergency responders, farm and factory workers and nursing home workers. The state has also helped Arizona, Nevada, Oregon, and Alaska meet unmet emergency PPE needs by providing a total of 17 million surgical masks.

With the addition of Butte County, Newsom shared there are now 35 of the state’s 58 counties with additional requirements. “We have discussed enforcement methods for counties and businesses who are the exceptions…thumbing their noses at the mandatory mask mandate,” he stated. He added, “I want to applaud the President and others for now wearing a mask and sending a message. I hope and expect that it will have an impact on socializing a deeper consciousness of the power and potency of this nonpharmaceutical intervention on reducing the transmission and spread of this virus…and we are not going to let off.”

The governor also indicated his office is looking at extending consideration of EDD, including evictions, workers comp, sick leave, and protections for essential workers and other groups where there is disproportionate spread.

Among these are those who are homeless or without stable residences. He noted the recent launch of Project Home Key, an effort involving $600-plus million in resources focused to immediately draw down and acquire motels and hotels to provide stable housing, “It is not just [purchase] tents, cots, and mats and call it a solution. We want to move away from the temporary…and extend a bridge to more permanency,” he explained. He added that the challenges at hand would continue to call for creative solutions.