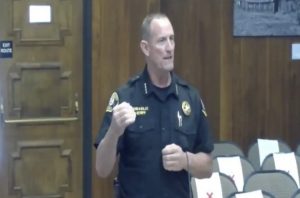 San Andreas, CA — There was a back and forth discussion regarding face mask requirements at Tuesday’s Calaveras Supervisors meeting.

Sheriff Rick DiBasilio stated that he believes Governor Gavin Newsom’s mandate requiring face coverings in public is un-constitutional and he will not go out and actively enforce the matter. DiBasilio said it comes down to personal freedom and liberty.

He stated, “The 14th amendment prohibits the government from depriving its citizens of property, life and liberty.”

Supervisor Benjamin Stopper praised the sheriff and stated it was a “heavy subject” and there are points of view  from “every direction.”

Supervisor Jack Gararmendi made a counter point, “Great freedoms come with great responsibilities, and we have to work together as a common good to come together. I wear my mask because I respect you and you wear your mask because you respect me.”

Garamendi said he agrees with the sheriff that he does not want to make criminals out of people not wearing masks, but also argued that it should not be a political issue.

Dibasilio noted that he is requiring his deputies to wear masks when possible, and Supervisor Merita Callaway praised that point. However, she argued, “The Governor has mandated masks, and what I’m hearing you say is ‘that doesn’t apply to me as law enforcement,’ and I know there are other police chiefs and sheriffs that feel the same way that you do….I think it would help if our sheriff said, you shall wear a mask. It doesn’t mean that you are going to arrest them.”

Dibasillio noted that he can agree to encourage everyone to wear a mask, but indicated he is not willing to actively enforce the issue, because of an individuals personal liberty and rights.

During his speech, the Sheriff also criticized an additional directive of Governor Newsom to release 8,000 inmates from California prisons. DiBasilio stated that some of those inmates will have COVID-19, and argued that they will now be let out into communities, instead of being in a controlled environment like a state institution.