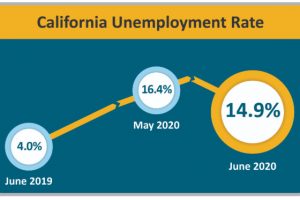 Sonora, CA – A record number of jobs were added in the month, but that gain could be lost as COVID-19 shutdowns increase across the state.

That prediction comes from the state Employment Development Department, which released its unemployment report on Friday. Although California added a record 558,000 jobs in June as many more businesses reopened, EDD officials say much of the growth last month was from restaurants and bars. Those are the very businesses being affected by new closure orders this month that are expected to bring big job losses in next month’s job loss report.

The state’s rate showed improvement decreasing to 14.9 percent, better than the record 16.4% in April and May but still higher than at the height of the Great Recession a decade ago. The Mother Lode followed suit with slightly larger declines. Tuolumne County’s rate dropped nearly two percentage points to 14.49-percent from 16.5 percent, which was slightly higher than the state’s average for the month of May. A total of 2,950 are unemployed out of the 20,530-workforce. In Calaveras County, the June jobless rate dipped by a percent, from 12 percent in May to 11 percent, leaving 2,270 without employment out of a labor force of 20,630. For another month, Lassen County had the lowest rate at 9.5 percent while Imperial registered the highest at 27.3 percent.

In June, leisure and hospitality industries gained 292,000 jobs, the most of any sector. With schools closed, education took the biggest hit with 36,000 jobs lost. Nine of California’s 11 industry sectors added jobs last month,  benefiting from statewide re-openings of mostly bars and dine-in restaurants. That sector has regained more than a third of its job losses from March and April. Percentage-wise, construction had the biggest rebound since the historic losses in March and April, recovering 68 percent of the jobs lost.