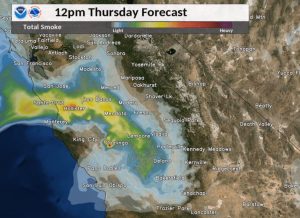 Coalinga, CA — A fire burning in Fresno County just outside the city of Coalinga is up to 16,500 acres and it is 20-percent contained.

The Mineral Fire ignited on Monday and it has been gradually growing each day. A map developed by the National Weather Service shows that by late this morning there could be some light drift smoke from the fire visible in the Mother Lode region (see image). One structure was destroyed by the blaze early on and an additional 60 are threatened.

The 938 firefighters assigned to the incident have been challenged by the steep terrain and extremely hot temperatures. Thankfully, no injuries have been reported. Last night officials worked to strengthen and build containment lines.