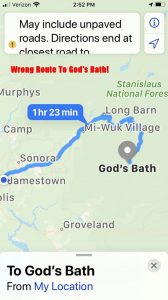 This week, Tuolumne County Search and Rescue shared details of a mission to assist a vehicle of individuals who had been headed to God’s Bath, located on the Stanislaus National Forest along the Clavey River west of Cherry Lake.

Officials say the subjects had accessed Apple Maps from their smartphone for directions and wound up on a dirt path where they sustained significant damage to their vehicle, which became disabled as a result. They called 911 for emergency assistance and while responding to the request, a deputy saw that two more vehicles were taking the same incorrect route.

The moral of the story they say is to not rely on Apple Maps to provide the correct way to God’s Bath because it provides an incorrect route through Long Barn that turns into a dirt passage. The correct route to the trailhead is a long and winding paved road after which there is a steep and difficult hike to the basin. From Tuolumne, the route is Buchanan and Cottonwood roads to Forest Rte 1N04.

They advise folks to use an abundance of caution when visiting places in the forest you have not been before because some are dangerous and difficult to access and require plans and preparations to remain safe during your excursion. As there is often limited or no cell service in remote areas, it includes knowing that you will likely be on your own for a long period of time before rescue personnel is able to arrive.