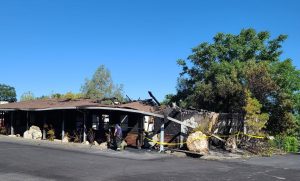 Update at 12:15 p.m.: A structure fire that broke out just after midnight in Angels Camp remains under investigation.

It occurred at a building in the Stanislaus Professional Center located in the 500 block of Stanislaus Avenue that houses a medical center and the Angels Camp Structured Preschool. The building was unoccupied at the time and no injuries were reported.

Angels Camp Fire officials say firefighters were able to confine the blaze to the building with no extension to the surrounding buildings or vegetation. They ask anyone who was in the area around the time of the fire who may have seen something out of the ordinary or anyone with information about how the fire started to call Angels Camp Police Department at 209 736-2567.

It is in the 500 block of Stanislaus Street in the City of Angels Camp.

The Calaveras Office Education states, “The cause of the fire is currently under investigation. Our goal is to provide a clean and safe environment for our staff and students. We are already working on an alternative site to continue to serve our families. Students are currently on summer break and no staff was on-site at the time, and everyone is safe. Parents have been notified. We are thankful that no one was hurt.”

Numerous firefighters from various agencies were dispatched to the incident during the early morning hours. It was reported at around 12:20am and contained by 2:39am. We’ll pass along more information as it becomes available.