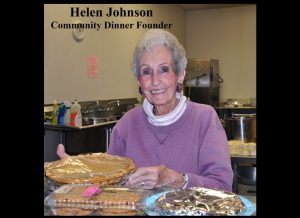 Columbia, CA — A local Columbia volunteer who made an impact in the community by helping to provide meals to those in need has passed away at the age of 99.

Before being forced to close its doors this past March due to coronavirus, the “Helen Johnson Community Dinner Program” was serving free meals to 80-100 people every Monday evening at the Church of the 49ers in Columbia. The program will relaunch once it is safe to do so.

The namesake, Helen McCleary Johnson, died on June 27 on her 99th birthday.

The Church of the 49ers reports that Johnson felt called by God in 2004 to feed the hungry and lonely people of Columbia. At the age of 82, she and a couple of others at the church started a new ministry to serve nutritious free meals once a week to anyone who came to the Faith Hall on the church’s campus. She was the chief cook and organizer. In 2012, other volunteers stepped in to keep the dinners going after Johnson was forced to retire and take care of her ailing husband, Ray. The program was also named in honor of the founder.

The Church of the 49ers reports, “Helen left a great legacy of Christian service to the people of her community and her church. She will not be forgotten.”

After her passing last month, the Terzich and Wilson Funeral home had noted that a private family graveside service for Johnson was planned for the Columbia City Cemetery.