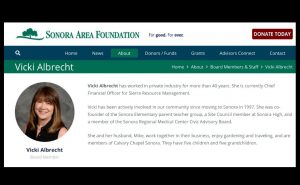 Sonora, CA — The Sonora Area Foundation has expanded its board of directors to 12 with the addition of three new members.

They include Vicki Albrecht, Clark Segerstrom and Marianne Wright. Albrecht and Wright are new to the board, while Segerstrom had previously served from 2003-2015. You can click on “view photos” to see their individual biographies.

The Sonora Area Foundation, a non-profit organization, is celebrating its 30th anniversary. Its mission is to strengthen the community through assisting donors, making grants and providing leadership.