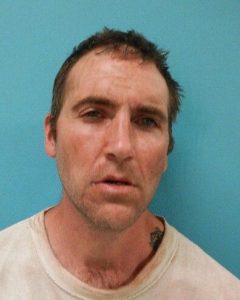 Sonora, CA – An arrest has been made in connection with a suspicious fire allegedly set over the weekend behind a local business.

As reported here, a blaze broke out Saturday in the early afternoon behind the Chrysler Dodge Jeep Ram dealership on Mono Way that burned in about a half-acre of grass before firefighters contained it.

On Saturday afternoon, deputies responding to assist firefighters with the fire were made aware of a witness who had seen a man emerge from the area with what appeared to be, a propane bottle in his hand. Once provided a description, they quickly began searching the area and shortly thereafter located Wallace walking along Sanguinetti Road.

Sandelin states Wallace initially was non-compliant and provided deputies with a false name but a Sonora Police officer was able to help positively identify him and it turned out the suspect had an outstanding misdemeanor warrant.

Once placed in handcuffs Wallace was searched and found in possession of several prescription pills but the propane bottle was not located. He faces charges of arson, providing false identification to law enforcement and the outstanding warrant along with illegally possessing drugs without a prescription. He was assigned a $30,000 bail.