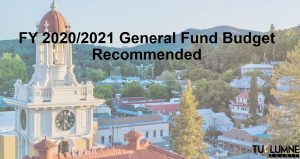 Sonora, CA — After months of preparations and discussions, the Tuolumne County Supervisors passed a preliminary budget for the fiscal year that begins on July 1st, and made adjustments to the current budget ending on June 30.

There was a late effort to save most local library programs as part of the new budget, but county leaders acknowledged that tough decisions will need to be made again next year.

Under the new spending plan, the Sonora Main Library will remain fully operational, as will the Groveland Branch. However, it will be a phased reopening with curbside service at first, due to COVID-19 restrictions, followed by a more traditional re-opening. Decisions will be made later in the year, ahead of September, regarding the fate of the Tuolumne and Twain Harte branches, and the bookmobile.

The first action the supervisors took today relating to the budget was to approve memorandum of understandings with the Management Employee Association and the Deputy Sheriff’s Association regarding an implementation of a three-week furlough period.

The new budget has around $73-million in General Fund spending, compared to $80-million during the current fiscal year. The overall operating budget will be around $181-million next year, compared to $211-million this year. Sales tax revenues are anticipated to be down 7-percent next year, Transient Occupancy Tax dollars down by 40-percent, and the gas tax will likely be down by 40-percent. In addition, many of the positions cut from the upcoming budget are “temporary eliminations” and will have to be addressed next year.

It was also noted there are no contingency funds included in the proposed plan.

This prompted a warning from the county’s Clerk and Auditor-Controller Debi Bautista. She stated, “If we don’t look at trying to put away money into our contingencies, we won’t have to wait until next year to have problems, we will have problems earlier.”

She stressed that the budget problems are not solely related to COVID-19, but the county has been continuing to spend more money than it has coming in, over past years.

She noted that Tuolumne County’s reserve fund (around $2.5-million) is much lower than Calaveras County’s ($7-million). The City of Sonora has a much smaller budget, but holds a healthier reserve fund of around $2.6 million.

Bautista added, “Once we use us our reserves, if that is the path we are going to go down, then what?”

More adjustments will likely be made ahead of approving a final budget around September, when better revenue estimates are known, and additional money could become available. The county will also look at potential tax generators at future meetings which could be placed on the November ballot.

In addition, regarding the existing budget that expires at the end of the month, the board reviewed actions taken last September, and more recently over the past few months because of COVID-19, to save millions of dollars for the fiscal year that ends on June 30. Recent cuts included the coronavirus related temporary closure of the libraries, Recreation Department, Standard Park and the Youth Centers ($200,000 savings), a reduction of jail overtime ($85,000), a reduction in jail training ($100,000), and a reduction in payment to Visit Tuolumne County ($318,000). There was also an increase in revenue related to building permit and land use fees ($400,000), and CARES Act Funding ($160,000).

Click here to view the preliminary budget details released ahead of the meeting.