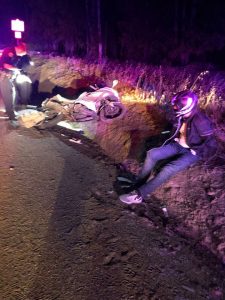 The chase initiated on a weekend night after a sergeant observed a motorcycle traveling recklessly at a high rate of speed in the area of South Washington Street near William Street. The sergeant attempted to pull the motorcycle over, but the driver failed to stop and led the sergeant and another SPD officer on a pursuit along southbound Washington Street and eastbound Hwy 108 at speeds exceeding 90 miles per hour.

Davis ultimately lost control of the motorcycle and crashed near the east entrance of Twain Harte. The chief says the suspect did not sustain any significant injuries and was immediately taken into custody. A subsequent personal search of Davis and his belongings turned up a glass pipe and a hypodermic needle. So, in addition to felony evasion, he was booked into Tuolumne County Jail for possession of paraphernalia and for operating a motorcycle on a suspended license.