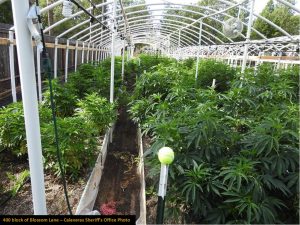 Calaveras County Sheriff’s spokesperson Sgt. Greg Stark reports that MET members served a search warrant for illegal marijuana cultivation last week at a residence located in the 400 block of Blossom Lane in Railroad Flat. The property had been subject to previous search warrants with two eradications of grow operations in 2019 and again this past May.

There, deputies seized 3,068 growing marijuana plants and saw clear evidence that the growers were using the site as a nursery to reproduce more. While no suspects were located at the scene, seized evidence is being used to further investigate the case.

An unrelated search warrant was served later in the week in Mountain Ranch at a residence located in the 8000 block of Cave City Road where deputies seized 517 growing marijuana plants and 72 pounds of processed marijuana.

Stark adds that the residence had been converted to an indoor growing facility and contained hazardous electrical connections typical of such operations. Code Compliance was called in and an officer “red-tagged” the structure. Aerosol foggers containing chemicals not legal for use on cannabis were also discovered within the growing areas. Although no suspects were located at the scene, the investigation is ongoing with evidence seized from the scene.

“It should be noted that the Marijuana Enforcement Team serves numerous search warrants monthly, and during these search warrants, evidence is collected, which is used to further the case and overall investigation,” Stark explains. “The mere fact that no persons were contacted or arrested at some of the locations does not imply that the case is complete. For weeks and/or months following a warrant, the investigation into each site continues. In some cases, charges are referred to the District Attorney at a later date, pending the results of evidence testing, interviews, or follow up investigations.”

Anyone with information on illegal marijuana cultivation sites, or sites manufacturing concentrated cannabis is encouraged to call the Sheriff’s Marijuana Tip Line at 209 754-6870.