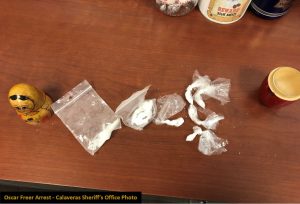 San Andreas, CA – A methamphetamine-stuffed curio found hidden in the bushes outside a Mother Lode Courthouse landed a local in jail.

Calaveras County Sheriff’s spokesperson Sgt. Greg Stark recounts on-duty deputies providing security at the Calaveras Superior Court observed a male exit a vehicle and head towards the courthouse last Friday. On his way towards the building, the suspect detoured from the main path and placed something in the landscaping just before entering the building.

The deputies who observed the man’s actions searched the area and discovered a wooden object that turned out to be a wooden “nesting doll,” that upon further scrutiny, was found to be holding numerous packages of meth. The discovery prompted a call to the Narcotics Enforcement Unit, who swiftly arrived and awaited the suspect’s return to pick up his stash.

The man, later identified as 35-year-old Oscar Freer of San Andreas, was arrested as he walked back to recover the doll, which was later determined to contain 9.6 grams of meth. He was booked into Calaveras County Jail with a $30,000 bond for possession of a controlled substance and for an existing failure to appear bench warrant relating to previous narcotics charges.