The Tuolumne Lumber Protest Is This Sunday 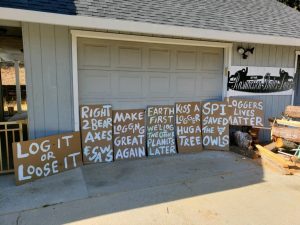 Aaron Rasmussen, the Tuolumne Lumber Jubilee Board President, was Thursday’s KVML “Newsmaker of the Day”.

For seventy years, this event was known as the Tuolumne Lumber Jubilee. It typically takes place over four days and nights at West Side Memorial Park in Tuolumne City.

This seventy-first year, the name has been changed due to coronavirus restrictions. The decision to change the name was made after Rasmussen received a call from the Tuolumne County Health Department.

According to Rasmussen, “(The Health Department) informed me that the Tuolumne Lumber Jubilee is considered to be a mass gathering and the only exceptions are for religious services and protests.” To which he says he replied, “We have a church service (starting at 9 AM) and we can adjust to make this event a protest. So in order to stay in compliance with state and local orders, this year’s event is considered to be both a religious service & protest. The Protest events will start at 11 AM.”

Because it is only a one day event, several notable items will be absent this year. The Miss Lumber Jubilee Pageant will not take place. There will be no live music, no carnival rides and no parade. Most of the craft, drink and food booths will be gone from the Park.

The Protest events that are scheduled include the following competitions: ax throwing, Jack n Jill, Bull of the Woods, Underhand Chop, Men’s Buck, Women’s Ax, Arm Wrestling, Speed Ax, Hot Saw, Mike’s Mowers, Chopper and more. Late Sign-ups will be from 9 AM to 10 AM on the west lawn of West Side Memorial Park.

The Tug of War teams this year will be: Tuolumne Climbers vs Lee Smail Construction.

Asked how just changing the wording makes the event a protest, Rasmussen asserts, “The protest is the fact that we’re having it. We can’t stay in this constant fear. We can’t stay in this constant state of closure. It’s not healthy for the community. It’s not healthy for our economy. So, in itself it’s a protest to say as a community we’re still having this.”

Clarke Broadcasting contacted Tuolumne County Health Officer Dr. Liza Ortiz who confirmed that her office had spoken to Rasmussen and had relayed the state coronavirus rules. While declining to be interviewed, when asked whether her office would take any action to shut down the event, Dr. Ortiz responded, “Due to the rapid and continuing changes to the state’s COVID-19 restrictions, at this time I cannot comment further.”

Receiving encouragement from event board members and the public, Rasmussen believes that “as a community, this is going to be a healthy thing for the community to continue forward.” Noting that it sounds “ridiculous” that the name has to be changed from Tuolumne Lumber Jubilee to Protest, he suggests, “It’s also ridiculous when you look around our community and what’s happening. There are thousands of people at Walmart and Lowes and hundreds of people at protests. We really feel, as Americans, that we have the right to peacefully assemble, there’s no exceptions to that. We really feel strongly that we are moving forward in a positive way.”

Rasmussen advocates that one of the positives is the economic impact on the area, which he says is “huge” and desperately needed at this time. However, he acknowledges, “It’s hard to say what the estimated draw is going to be, obviously due to COVID. It depends on whether people believe it is safe to come out or not.” Admitting that it will probably not be “nearly as good as it usually is.”

Regarding whether masks will be required, or provided, to attendees, Rasmussen contends, “We’re not going to be the police.” Pointing out that coronavirus information he received from the county’s health department is posted online, including last week’s face-covering order from the state, he adds, “We simply ask people to be responsible. If someone feels sick, they should stay home.”

Rasmussen has not heard back from the Tuolumne County Public Health Department since the name change.

However, Rasmussen had this response when asked what will happen if county health officials try to shut down the event, “They can come an arrest me and lock me up, that’s fine. I’ll be the guy to answer for that on that day.”