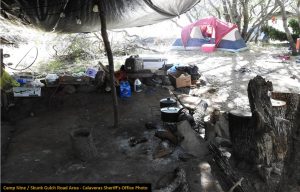 The incidents, all unrelated, came out of warrant searches made between June 3-12 for evidence of illegal marijuana cultivation at locations in Railroad Flat, Vallecito, and Valley Springs.

Deputies served a search warrant on a property with no residence or address near the vicinity of Camp Nine Road and Skunk Gulch Road in Murphys June 9.

According to sheriff’s spokesperson Sgt. Greg Stark, the investigation required deputies to hike and use off-road-vehicles to get in and haul out the evidence.

While onsite, deputies discovered a large camping area, eradicated 1,156 growing marijuana plants, and discovered and seized an AR-15 type firearm. The weapon did not carry any serial number and was not commercially manufactured. Stark says that while no suspects were contacted at the scene, evidence was collected for the ongoing investigation.

During a warrant search warrant at a residence located in the 5000-block of Bergsma Lane in Valley Springs, deputies seized 695 growing marijuana plants, six grams of concentrated marijuana, and a small number of hallucinogenic mushrooms. They also found and gathered evidence of a marijuana concentration operation utilizing butane and other case materials.

Stark shares that Calaveras County Code Compliance was contacted due to extensive illegal wiring onsite, adding that the occupant of the residence was in the custody of the Calaveras County Jail on unrelated charges during the service of the search warrant. The case, still being investigated, will be forwarded to the District Attorney for prosecution.

Another grow bust was conducted on a warrant search site located in the 1400 block of West Forty Road in Railroad Flat, where deputies seized 356 growing marijuana plants, 18 pounds of processed marijuana, and a firearm. According to stark, the grow site showed evidence of previously being outdoors and recently moved into indoor growing rooms on the property. No suspects were found on the scene but evidence was collected for the continuing investigation.
Stark encourages anyone with potential information about illegal marijuana operations to call the Sheriff’s Anonymous Marijuana Tip Line at 209 754-6870.