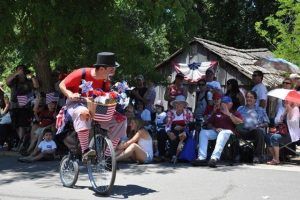 Columbia, CA — One of the biggest Independence Day events in the Mother Lode will not take place this year due to COVID-19.

The Columbia Chamber of Commerce is typically very busy right now organizing its Fourth of July festival which includes a parade, games and BBQ events at Columbia State Historic Park.

The park is open for visitors, but given the big crowd the event typically attracts, it would be too difficult to practice social distancing. So the organization says the event is canceled, with plans to return “better than ever” in 2021.

It is believed that the first Independence Day parade was held in the community of Columbia in 1852. Columbia Chamber of Commerce member, Leslie Davis, says, “I imagine the patriotic parade did not happen during the 1918 flu pandemic or perhaps during World War II summers, but most other years it has been a highlight for the citizens of Columbia and neighboring towns, and draws thousands of visitors from the Valley and the Bay Area and beyond.”

No decision has been made regarding the fate of other popular events planned in Columbia later this year. They include the Columbia Art Show and Fiddle & Bango Contest in September, the Harvest Festifall craft fair in October, and the Las Posadas Nativity Procession in December.