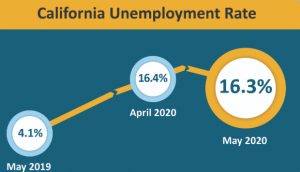 State figures released Friday for the month of May indicate a minimal drop to 16.3 percent as employers added 141,600 jobs. However, the numbers have been revised because the April figure originally reported as 15.5 percent turned out to be 16.4 percent after an adjustment was made to correct a classification error.

The minimal job gain of a tenth-of-a-percent follows an incredible loss in April of 2.4 million jobs, a staggering number that state officials acknowledge as “never before seen in California’s history.”

Locally, in Calaveras County, the May figures indicate the unemployment rate is at 12 percent (2,390 unemployed out of a workforce reported at 19,970). In Tuolumne County, at 16.5 percent (3,430 workers of a 20,790 workforce), the rate is slightly higher than the state average.

The counties with the highest unemployment are Mono and Imperial, which respectively come in at 28.9 percent and 27.8 percent. Lassen County comes in with the lowest rate at 10 percent. San Francisco County reported 12.6 percent of its workforce as unemployed.

Nine of California’s 11 industry sectors gained jobs in May. Construction posted the largest job gain (+75,000) thanks to strength in specialty trade contractors and ongoing construction projects. Leisure and hospitality (+64,800) had the second-largest job gain due to growth in accommodation and food services. Government (-95,800) had the largest drop with state and local government jobs both experiencing large decreases over the month.

The state’s percentage of unemployed workers remains far higher than the 12.3 percent rate it hit at the height of the Great Recession a decade ago. California has paid more than $30 billion in unemployment benefits since the start of the pandemic, according to the California Employment Development Department. The state has exhausted its account to pay these benefits, forcing it to borrow more than $2 billion from the federal government.

It is even more shocking to compare the state’s current employment straits to this past February before COVID-19 impacts hit when California’s economic expansion had hit the decade mark during which more than 3.4 million jobs that had been created accounted for 15 percent of the nation’s job growth. About two-thirds of those gains were wiped out in April and the unemployment rate hit double digits for the first time since the Great Recession.