Over $2 Million In Scholarships Reported For Class Of 2020 Grads 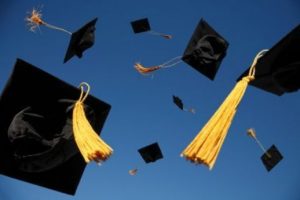 Sonora, CA – Well over $2 million in scholarship awards were given to Class of 2020 graduating seniors.

Clarke Broadcasting reached out to the superintendents of Tuolumne and Calaveras counties for a tally and received the following reports.

Summerville High and Connections Visual and Performing Arts Academy totaled more than $140,200, according to a list provided by Grade level Coordinator Daniel Atkins.

Calaveras County Schools Superintendent Scott Nanik says a total of $720,000 in scholarships to graduating seniors were handed out at Bret Harte, $806,090 at Calaveras, and $18,400 at Mountain Oaks.

Due to the COVID-19 pandemic banning large gatherings, instead of partaking in mass graduation cap tosses, Mother Lode graduates, as reported here, celebrated via virtual, prerecorded, and/or drive-through ceremonies.