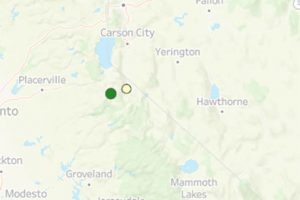 wo waterways in Alpine County with reports of algal blooms

Sonora, CA – State water officials are warning that with summer approaching and recreation on the waterways increasing — watch out for harmful algal blooms (HABs) that can make humans sick and even kill pets.

It is a concern echoed by Tuolumne County Environmental Health Officer Rob Kostlivy, “All the waters of California are subject to the algal bloom and that is something that we have seen an uptick in the past several years.”

Last year in July and August samples were taken of an algal bloom that was growing near a log jam in the Middle Fork of the Stanislaus River and also nearby in the New Melones Reservoir. Cyanobacteria, small microbes that live on land and in the water, were found in the algal bloom by a log jam and in the bright green waters of the lake downstream but at lower levels. While harmful toxins were not detected in the blooms, caution advisory signs were posted from the Tuttletown boat ramp all along the river to Camp Nine and the log jam, as reported here.

“We have not been out on the lake yet, but we’re assuming that we will have a similar situation. As the weather heats up, the algal blooms typically start to grow again,” acknowledges Kostlivy.

The freshwater HABs thrive in warm, still waters. Kostlivy indicates that this year with much of the winter snowpack already melted off the mountains the water flow will be minimal, making it conducive for blooms to grow. Currently, his department is keeping an eye on area lakes, rivers, streams, and ponds for any signs of algae growth and they encourage the public to do the same.

“We urge all county residents to look for bright green, blue,  or brown or red color on the water that does not look normal, or it looks like there is some type of spill in over the top of it,” instructs Kostlivy. He also details, “It will have a smell to it like rotten eggs or sewer and there could be some dead fish and plants around it.”

Another good way to describe the algal blooms is like paint floating on the water, as pictured in the image box. If that or the aforementioned signs are observed, the public is asked to call the county’s environmental health department at 209-533-5665. Koslivy explains reporting is key,  “It’s extremely important because we are limited in staff and when we can have the public be our eyes and ears out there and can report a situation to us. It at least makes us aware and we can make the correct phone calls and assemble a team to go out and investigate.”

A report can also be filed with the state by clicking here. Last year, there were 240 reports of these algal blooms across the state. So far, 20 counties have filed reports this year. While pictures in the image box taken this week of New Melones show a tint of green, the only Mother Lode county reporting blooms is Alpine. One, reported in mid-May, is in the Indian Creek Reservoir and the other was reported at the end of that month in Red Lake. Both can be viewed along with a map marking all the areas in the state that have had reports filed by clicking here. To get an update anytime on waterways in the region, click here.

When toxins are produced by cyanobacteria, it can harm the environment, people (mostly small children), and even kill pets, wildlife, or livestock. Exposure to it can cause eye irritation, skin rash, mouth ulcers, vomiting, diarrhea, and cold and flu-like symptoms. Most vulnerable are dogs, as they tend to drink while in the water and lick their fur afterward, increasing their risk of exposure and illness. They can experience vomiting or diarrhea, lethargy, abnormal liver functioning, difficulty breathing, foaming at the mouth, muscle twitching, and sometimes death.

The California Water Boards offer these recommend healthy water habits to practice while on the state’s waterways: