Update: Fire Burns Structure And Some Vegetation In Sonora 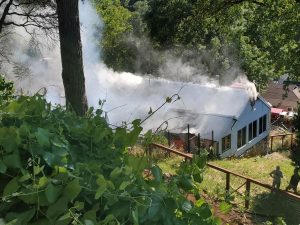 Update at 5:18pm: CAL Fire reports that a fire that heavily damaged a structure in the area of Summit Avenue in Sonora, and also a small patch of vegetation, is now knocked down. No injuries have been reported, and what ignited the fire remains under investigation. Air resources have been released back to Columbia Air Attack base, and ground resources will continue to mop-up the incident throughout the evening.

Original story posted at 4:57pm: There is a fire reported in the area of Summit Avenue in Sonora, according to CAL Fire.

An estimated 60-percent of the structure is engulfed in flames. The fire also spread to some nearby vegetation, but thankfully the grass fire was quickly contained. The structure fire continues to put up considerable smoke near downtown Sonora.

A special thanks to community news partners Evan Jacobs and Karen Jensen for submitting photos. Pictures can be sent to news@clarkebroadcasting.com.