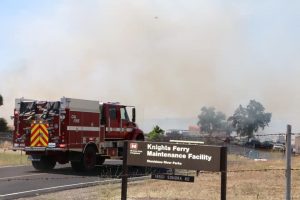 Today, one engine and a hand crew will remain on scene to complete the fire line and mop-up along those lines where the flames have been extinguished, according to CAL Fire spokesperson Emily Kilgore.

An outbuilding was damaged by the fire, but the extent of the damage is unknown at this time. Kilgore notes that the historic covered bridge was not threatened during the blaze.

The fire broke out around 4 p.m. on Thursday, as reported here. The cause of the fire remains under investigation.