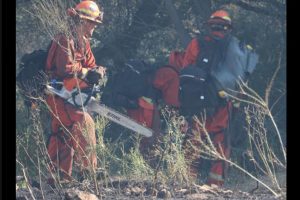 The flames broke out in some brush near the Stanislaus River Parks in Knights Ferry just before 4 p.m. on Thursday, as reported here. CAL Fire spokesperson Emily Kilgore tells Clarke Broadcasting that the fire remains 45 acres. She adds that the flames spread to an outbuilding, but she did not know the extent of the damage to the structure. Also, Kilgore notes that the historic covered bridge was not threatened as the blaze traveled towards the east away from it.

After working the fire overnight, firefighters were able to reach 75 percent containment on Friday morning. Throughout the day two engines and hand crews worked on building and strengthen containment lines. Kilgore says crews are doing mop-up operations where they are able and continue to work towards full containment.