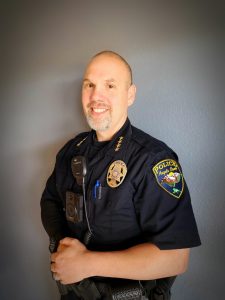 Angels Camp, CA – Those traveling the Highway 4 and 49 corridor will notice an enhanced law enforcement presence in the event of impromptu protests.

According to Angels Camp Police Chief Scott Ellis, a planned Black Lives Matter demonstration set for Friday afternoon over the recent death of George Floyd at the hands of white police officers in Minnesota by two local students was postponed Wednesday morning due to reported social media threats and other harassments.

However local law enforcement agencies still planned to cover the area. Plans by Claudia Loomis and Riley Lowell were to beginning at 3 p.m. stage a peaceful protest at the intersection of the two highways, a popular place in Calaveras County due to its high visibility for demonstrators to hold signs and chant.

On Thursday evening, the chief released a formal bulletin, indicating his office has learned of people still planning to assemble at Highways 4 and 49 both on Friday and Saturday afternoons.

The statement reads, “We support the right to free speech and peaceful demonstration and will work to provide a safe place for everyone’s voice to be heard. Help us keep the demonstrations peaceful by promptly reporting any situation or potential situation, that may threaten life and/or property. Call 911 for in-progress emergencies. Call 209 736-2567 or 209 754-6500 for all other incidents.”

It goes on to say, “We encourage our community and all participants to remain peaceful and obey laws. We will continue to work cooperatively with other law enforcement agencies to monitor any events that happen in our City and surrounding areas. We expect the demonstrations to remain peaceful and are ready to address any unforeseen circumstances that may arise.”

On Wednesday, City Administrator Melissa Eads in an email to Clarke Broadcasting, affirmed the city’s support of the coordinators and their right to protest under their 1st Amendment rights. “We are proud of their passion and commitment to bring change. Unfortunately, there have been alleged threats…we denounce any threats made against the organizers. The City does not support acts of violence and we call for the safety of all engaged in protest both locally and across the nation. The City is committed to work with Claudia and Riley and to bring resources to support a conversation within our community moving forward. We also remain committed to providing safety to those who chose to execute their 1st Amendment rights.”

As the Mother Lode’s other law enforcement agency heads did, Chief Ellis released a statement early in the week, joining with the community in the wake of Floyd’s death. “As law enforcement professionals, police officers everywhere take an oath to serve and protect our communities,” Ellis wrote. “The officers shown in the Minneapolis video failed miserably in their professional responsibility — the life of every human being is valuable and to devalue life and discard its existence is intolerable.”

In an interview with Clarke Broadcasting Wednesday afternoon, as a protest in downtown Sonora was underway, asked about what he has noticed about “nuanced” differences between those who are advocating “Black Lives Matter” and those who respond with “All Lives Matter.” the chief was direct, choosing his words with care.

“Protesters [supporting Black Lives Matter] feel like the black community is oppressed and they want to support them and try to make changes so we can get through those problems. I think because of things that have happened nationwide with the unlawful death or killing of black people under certain circumstances [All Lives Matter advocates] are not able to separate that and think they are saying only black lives matter, not realizing…it appears that black people are getting killed at a very high rate by law enforcement or accused criminally unjustly because of their race.”

He continued, “No doubt and I think everybody agrees that all lives matter but I think there is a special consideration of what [Black Lives Matter demonstrators] are trying to do bring attention to…that maybe black lives aren’t being taken seriously or they are less of a priority…and being taken advantage of because of race.”

Moving forward, the chief said earnestly, “We support the organizers and should they decide to in the future or whenever, to host another demonstration or protest…we are in support of them and we will do whatever we can to help them and ensure that they have a safe event.”

As protests continue around the country, Chief Ellis remarked, “We should be to a point now where the color of skin has no bearing and that it isn’t a thing anymore.” Floyd’s death, which has inspired elevated and expanded efforts to confront and crush racism, will continue to bring learning moments, the chief agrees, because of all we have seen in recent days across media outlets, the good and bad.

“Nothing more do we want here in the City of Angels Camp is to be able to say ‘we had a protest regarding injustices that occurred and it was peaceful and it went well, and we appreciate the organizers for communicating with us moving forward’.”

He was quick to add, ‘I totally respect their decision not to [at this time] and understand the threats made to them. I have zero problems with any of the protests until it becomes looting…damaged property and disrespect because that does not help the situation. You are not promoting anything positive when you are out there screaming obscenities and cussing at people — and that goes for both sides.”