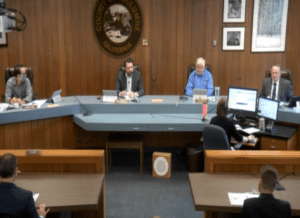 Update at  7:30m p.m. written by Tracey Petersen:  Tuolumne County Supervisors decided to wait and see what federal funding through the CARES Act related to COVID-19 will be provided to the county before making any final decisions, but other cuts in staffing will be made next week.

CAO Tracie Riggs could not elaborate on how many workers would be let go but said the board would be issuing those layoffs of permanent employees at the board’s June 2nd meeting. As reported below, the staff gave a presentation on fiscal reductions to keep the Mother Lode Regional Juvenile Detention Center open and offered three options on the possible closure of libraries, recreation, and youth centers. The cuts are needed to close a $2.6 million budget gap.

During the juvenile hall discussions, District 3 Supervisor Anaiah Kirk questioned the accuracy of the projected savings being outlined for the hall and the lack of firm contracts in place regarding issues like daily rates per youth for neighboring counties. He also along with the other board members wanted to know if a partial closure brought any actual savings.

Noting that the average number of youths staying at the facility has stabilized to eleven, Riggs says if the hall were to close, it would cost the county to send them to group homes. Riggs detailed, “I would say its either neutral or even a bit of a cost savings (keeping open), especially in light of the chief probation officer working to get those rates increased and that will make a big difference for us.”

District 2 Supervisor Ryan Campbell concluded that it does not make sense to close the juvenile center if that is the case, with District 4 Supervisor John Gray and District 5 Karl Rodefer also in agreement.

However, Campbell stressed, “If we’re back here a year from now talking about another budget where this hasn’t occurred, we haven’t got the agreements that we thought we’d get, we haven’t seen the kind of savings that we’re expecting, or projecting in this budget, there is going to be a real problem.”

Kirk continued, “We’ll be right back here looking at closing the juvenile center again and there will be a much stronger case for doing so.”

While discussing the three options for other closures, six county residents called in support of keeping libraries open with one suggesting a possible annual fee of $10 being charged to raise revenue.

Riggs reiterated that “a lot rides on the federal CARES Act. She indicated that more would be known on the exact amount around September when the adopted budget would need to be approved by the board.

When it came time to vote, still concerned about the juvenile hall costs, Kirk stated, “If this vote is for keeping it open indefinitely, no, I’m not voting for that. If it’s giving us more time to get some more of this information by the adopted budget, I would support that moving forward.”

With that said the board chose “Option C,” which will keep the juvenile hall open while libraries, recreation, Standard Park, and the youth centers will remain closed until later in the summer when revenue projections are known.

During that time, the board will continue to give staff direction and approve a recommended budget by June 16th.

Update at 12:47pm: Tuolumne County Probation Department leaders gave a presentation to the board of supervisors about ways to keep the Mother Lode Regional Juvenile Detention Center afloat.

Different scenarios were discussed, and Probation Department Chief Dan Hawks stated his preferred solution is to leave the Assistant Probation Chief position unfilled ($213,000 savings) and renegotiate contracts with outside counties who use the facility ($142,000 savings). Currently, counties have been paying about $100 per inmate per day. The revised plan includes guaranteeing two spots per day for Calaveras County and one for Amador County, at a rate of $150 per day, which would be paid for ahead of time by those counties.  Additional beds they would need would cost $175. Hawks noted that the two counties have agreed to the framework of the idea.

The overall proposal would result in a net cost of $1.22-million for the county to operate during the next fiscal year, compared to $1.44 million this year.

Superintendent of Schools Cathy Parker also gave a presentation about the many positives of the Gold Ridge Educational Center operated at the facility, and ways it builds relationships and reduces recidivism.

The supervisors also heard numerous public comments about the benefits of the facility and its impact on local youths.

The supervisors then at 12:45pm went into a lunch recess and plan to reconvene at 1:30pm. They did not give direction, or take action yet, on how to move forward with the facility during fiscal year 2020-21.

Update at 10:55am: The supervisors have emerged from closed session and have begun the presentation about the juvenile hall. The overall budget discussions will follow immediately afterwards. Details on watching the meeting are found below.

Original story posted at 10:30am: Sonora, CA — The Tuolumne County Supervisors are holding a special meeting today to discuss the future of the juvenile hall, and ways to balance the budget.

The meeting opened at 10am and the board went into closed session shortly after to discuss labor negotiations and two unidentified legal matters.

Ryan Campbell, who is the Vice Chair, is leading today’s meeting, and noted that Chairwoman Sherri Brennan is “not feeling well today,” so he is filling in. The other four supervisors are present. Campbell noted that the closed session items were being addressed first because they could have an impact on matters to be addressed later in the meeting.

It is not immediately clear when the board will reconvene into open session. The next item on that agenda will be a presentation regarding “options for operation of the Mother Lode Regional Juvenile Detention Facility.” Probation Department staff will have an opportunity to deliver a detailed presentation.

Immediately after, the supervisors will hear the latest on the budget shortfall for fiscal year 2020-21, which begins July 1st. You can read the presentation by clicking here.

It shows that the latest shortfall is $2.6-million following labor concessions, a reorganizing of some departments, postponing many recreation programs until Spring of 2021, and waiting to open Standard Park and the Youth Centers until September.

Three different options will be presented to close the remaining fiscal gap. Option A includes closing all of the libraries, eliminating recreation, and closing the youth centers.

Option B would reduce the libraries to one branch, eliminate the youth centers, and take additional revenue from reserves.

Option C is to keep the libraries, recreation, Standard Park and the youth centers closed until later in the summer when the finalized budget is approved, and better revenue projections are known.

You can watch the video of today’s meeting, live on myMotherLode.com.