Calaveras Supervisors Hear About Budget Shortfall Ahead Of Hearings 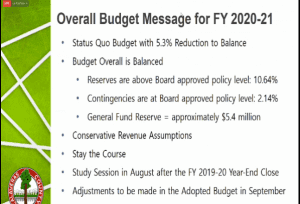 San Andreas, CA — Calaveras County government leaders will need to reduce spending by about 5.3-percent next fiscal year in order to balance the budget.

The board of supervisors received a presentation at yesterday’s meeting ahead of budget hearings that are planned for June 9-12. The projections call for a reduction of around $1.85-million in the General Fund.

CAO Albert Alt stated that some of the shortfall can be offset by continuing a “hiring chill” and cutting discretionary spending.

Noting as a positive, he stated, “In general, right now, the data that we have for the revenues that have come in for the current year, and as we project out, don’t give us the same pause that you may be seeing in Tuolumne County, or some of the other sister counties.”

The are also some increases in revenues anticipated, like just over a $1-million in Measure C marijuana money, and $2-million in Butte Fire recovery funding.

The presentation Tuesday listed a variety of possible cuts/revenue generators that the county could consider. They include things like a hiring freeze, layoffs, furloughs, revisiting the TOT methodology, asking voters to increase the sales tax and cutting “non-mandated” services (economic development department, libraries and public access TV).

The county will pass a preliminary budget next month, following the hearings, and then reassess it late in the summer when updated revenue projections are known.