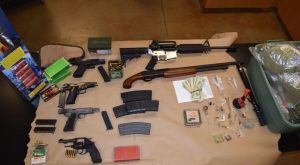 The former served a search warrant in the 12000 block of Cheyenne Drive in Burson where they located a rifle, a loaded shotgun, four loaded handguns, a stun gun and ammunition along with 3.4 pounds of processed marijuana, 5.2 grams of methamphetamine, 14 methamphetamine smoking pipes, and items associated with drug sales.

The recovered rifle was an AR15 style weapon that did not appear to have been commercially manufactured and did not have serial numbers.

Stark details that the recovered rifle was an AR15 style weapon that did not appear to have been commercially manufactured and did not have serial numbers, adding that investigators also found and seized two suspected stolen trailers and a suspected stolen all-terrain vehicle (ATV).

Arrested on the scene was 42-year-old Burson resident Joseph Lee Fisher. He was charged with being a felon in possession of firearms and ammunition; possession of controlled substances and marijuana for sale along with misdemeanor charges of altering a VIN number, possession of drug paraphernalia, illegal fireworks, and a stun gun. Booked into the Calaveras County Jail with a bail of $85,000, Fisher was released last night after posting bail.

Probation officers and deputies at the same time searched another Burson residence in the 11000 block of Arapaho Drive in Burson.

Stark says 31-year-old Zachary Day and 47-year-old Brandy Rachell Felts-Patelzick, both Burson residents, were arrested on scene. He was booked into jail on charges of revocation of supervision, felon in possession of a firearm and ammunition, possessing a stolen firearm, and misdemeanor possession of a controlled substance and drug paraphernalia. Day was also wanted on a felony warrant out of Stanislaus County. As he is not eligible under the Covid-19 “zero bail” judicial order, he is being held without bail.

Felts-Patelzick, who was booked and released, faces felony charges of probation violation and felon in possession of ammunition as well as misdemeanor possession of a controlled substance and drug paraphernalia.