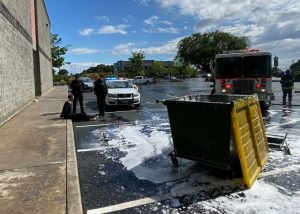 Sonora, CA — For a second time in recent weeks, a man was arrested on arson charges, and the latest incident was a dumpster fire.

The Sonora Police Department, and fire officials, responded to the incident at 3:45pm yesterday in the Crossroads Shopping Center. Witnesses relayed a description of the man who allegedly ignited the fire, who was later determined to be 39-year-old Tyler Schuster, and he was spotted fleeing the area by arriving officers.

He was arrested and booked into Tuolumne County Jail on $100,000 bail. The Sonora Fire Department was able to quickly extinguish the blaze and prevented it from damaging any nearby buildings.

We reported earlier this month that Schuster was also arrested in connection to an arson incident at Wrights Tire on South Washington Street.