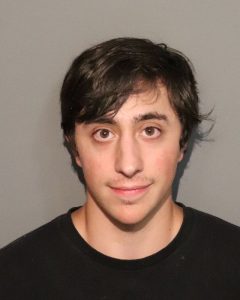 San Andreas, CA -– A man facing a charge of kidnapping among others is being held at Calaveras County Jail on a $150,000 bond.

Calaveras County Sheriff’s spokesperson Sgt. Greg Stark reports that dispatch received a 911 call Sunday night around 6:30 regarding an argument at a residence in rural Angels Camp and deputies were dispatched to the residence to investigate.

While they were responding, dispatch received additional information that the victim of the disturbance was at the Shell Gas Station in Angels Camp with injuries sustained from jumping from a moving vehicle.

Upon their arrival, deputies learned that 18-year-old Anthony Renato Mateo IV of Angels Camp had been in an argument with the victim during which he pointed a handgun at and ordered the victim to get into his truck.

While the two were traveling west on Highway 4 outside of Angels Camp, Mateo noticed a family member of the victim following behind and pulled to the side of the road. At that point, Stark says the suspect engaged in a verbal argument with the family member and demanded they stop following.

As Mateo got back into the truck and began to drive away, the victim seized the opportunity to escape and jumped out of the truck as it entered the roadway. The family member subsequently brought the victim to meet emergency medical staff and deputies.

Stark adds that the victim was injured after jumping from the moving vehicle, which had been moving at approximately 20 mph at the time of the escape, and was transported to a valley hospital for treatment.

Mateo was arrested a short time later without incident and booked into Calaveras County Jail on felony charges of kidnapping, assault with a firearm on a person, making criminal threats, and misdemeanor domestic battery. Stark notes that due to the nature of the crimes, Mateo does not qualify for release under the State Judicial Council’s “zero bail” order.