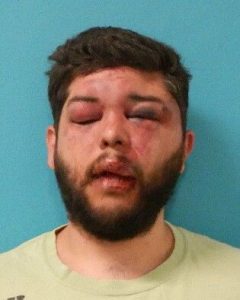 Sonora, CA –- A brawl that erupted from an argument over a lost dog resulted in three felony charges for a house-sitter.

Arriving deputies spoke with the reporting victim, who told them his friend, 27-year-old Michael Amyx of Manteca, had been house-sitting for him. When the victim returned home late Saturday night, Amyx told him his dog had run away, which generated a brief verbal argument after which the two men began consuming adult beverages together.

Sandelin continues that several hours later, Amyx and the victim began arguing again about the victim’s lost dog and Amyx allegedly pulled a handgun from his waistband, slammed it on the counter, then punched the victim in the face, which resulted in a physical altercation between the two. Amyx then left the residence after which the victim called the Sheriff’s Office.

Deputies took possession of the handgun at the house and located the suspect a short distance away. He was arrested for making criminal threats, battery on a person, and brandishing a firearm.