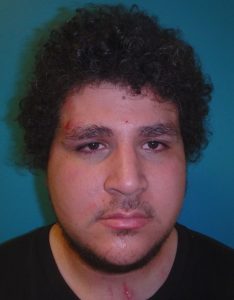 Sonora, CA — A man who choked a family member into unconsciousness during a weekend fight at a downtown motel is being held on a $50,000 bail.

The chief states that police were called to the business for a reported disturbance, which turned out to be a physical fight between Clarke-Garcia and his 44-year old stepfather that had ended just prior to officers’ arrival.

According to the chief, officers learned the suspect had reportedly shoved his mother during an argument, and when the victim tried to intervene, a fight began during which the suspect choked the victim until he lost consciousness. Clark-Garcia was booked into Tuolumne County Jail on a felony charge of battery with serious bodily injury inflicted.