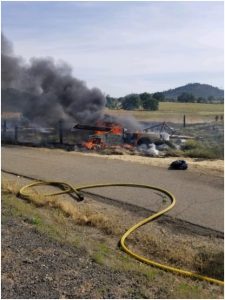 Sonora, CA — A local man is being treated at a Modesto trauma center following an accident at Highways 120 and 49.

CHP Sonora Unit officials state that shortly before 4 p.m. Friday, 56-year-old Scott Oliver of Jamestown was driving his Ford Ranger pickup east on Highway 120 east of 49 at a high rate of speed when he lost control of the vehicle while driving along a left curve.

After the truck overturned and collided with a power pole, the vehicle caught fire with Oliver trapped inside. CHP officials say a good Samaritan observed the vehicle on fire and was able to assist him out of his seat belt and the driver seat.

Oliver sustained major injuries and was transported by air ambulance to Memorial Medical Center in Modesto and during the investigation, it was determined he had been driving while under the influence of alcohol, so he was placed under arrest.

Officials add that Highway 120 remains temporarily closed in the area to allow crews to extinguish the fire.