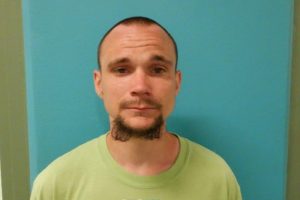 Columbia, CA – A Sonora man was arrested after being spotted peering into a Columbia home’s windows, but that is not where the loot found on him came from, according to investigators.

A call came in late Wednesday night to the Tuolumne County Sheriff’s Dispatch from an out of town homeowner reporting a man walking around his property looking into all the windows of the house on Italian Bar Road. Before deputies arrived, a neighbor drove over to check on the home and found 27-year-old Cody Michael Crosby still at the home.

Once on the scene, deputies began to question Crosby who claimed he was trying to visit his grandpa in the area. A records check revealed that he was on searchable probation for burglary and possessing a stolen vehicle. That allowed for a search of Crosby, producing two concealed fixed blade knives and a pair of black gloves. Also, inside his backpack was a laptop, portable radio and other personal items valued at over $950.

Further investigation found that most of the items belonged to another neighbor who confirmed the items were stolen from their vehicle. Deputies also took a walk around the home and discovered fresh pry marks on a side door, but it was determined the burglar did not gain access to the residence.

Crosby was booked into the Tuolumne County Jail for attempted burglary, grand theft, parolee in possession of a dirk or dagger, and stolen property along with violation of probation. Sheriff’s official relay that Crosby remains in custody as all the charges were felonies, making him ineligible for the current zero bail coronavirus protocols.