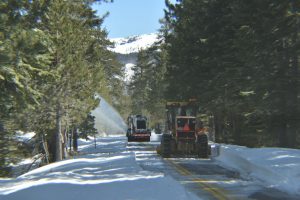 With regard to Highway 4 Ebbetts Pass, Caltrans spokesperson Warren Alford reports to Clarke Broadcasting that all the snow removal has been completed. However, he adds, “We have some critical paving work near Kinney Reservoir that needs to be completed before we can open that route along with other routine maintenance work.”

He adds that there is not an estimated date yet as to how long the work estimate is for completing those chores. Caltrans’ goal is generally to have the pass open no later than the Friday before Memorial Day weekend each year and sooner if possible.

While Highway 108 Sonora Pass is much closer to opening with a date possibly imminent, by the end of the business day Tuesday, Caltrans officials were not able to confirm when that will be.

As for Highway 120 Tioga Pass, which is managed by Yosemite National Park, spokesperson Scott Gediman says there is nothing to report as to a projected opening date for the route and the park entrances remain closed to the public at this time due to the COVID-19 emergency.