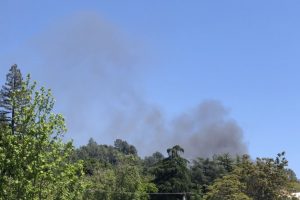 Smoke in Sonora skies due to structure fire

Update at 2:15 p.m.: A structure fire on the 50th block of Truckenmiller Road off Mono Way in Sonora has been knocked down. The flames broke out around 1:30 p.m. and a black plume of smoke could be seen in the sky. CAL Fire reports that the flames were contained to the structure, which was reportedly an abandoned house,  with no flames spreading to nearby vegetation. What ignited the fire is still being determined. All additional incoming resources have been called off the scene. Sonora Fire Department crews will remain on the scene mopping up for the next hour.

The fire is reported to be on Truckenmiller Road off Mono Way. Black smoke can be seen billowing into the sky, as seen in the image box pictures. CAL Fire reports when fire crews arrived on the scene a structure was fully engulfed in flames. It is reportedly an abandoned house that is ablaze.

No other structures are currently threatened. There are no further details at this time, but there is plenty of activity in the area so motorists are asked to slow down and avoid the area if possible.